Today the Tribe is already on the road for beautiful Oakridge Tennessee to compete in the Southern Intercollegiate Rowing Association (SIRA) Regatta!  This is the premier race for Southern club rowing and the first major test of the season.  The regatta will be held over Friday and Saturday.  The Tribe has big expectations as the women are coming off of a strong performance at Occoquan Sprints and the Women’s Novice 4+ finished in second place at this same race last year!  Coach Bayersdorfer will also be looking to repeat as gold medalists in the MNL4+.  For the complete schedule, please click here.  Race previews by squad are given below.

Novice Women
The novice women are looking forward to their first championship regatta this weekend. They are in the third event on Friday, which goes off at 2:08PM. WMRC, in lane one, is in a heat with five other crews, including Liberty, whom the 4+ beat two weeks ago at the Occoquan.  The top three boats from that quarterfinal will advance.

The squad has been working hard over the past two weeks and has been focusing especially on maintaining high stroke ratings. In between practices, the novice women also found time to keep up the tradition of pranking the men’s team. While the men’s boats were on the water, the novice women stole their shoes and clothes and strung them on a clothes line outside of the boathouse. 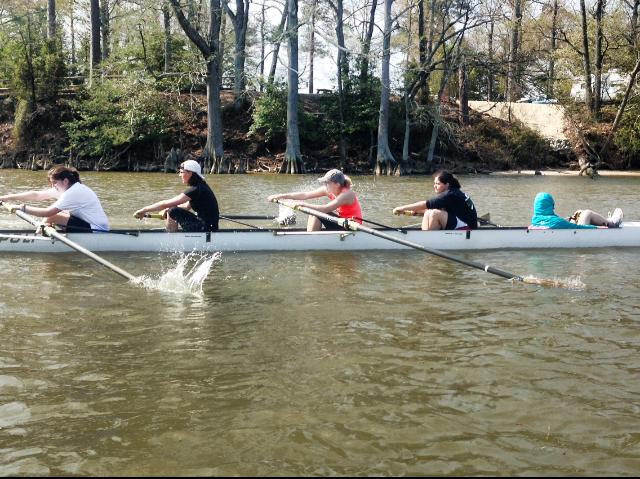 There will be two entries for this squad: a lightweight four and a heavyweight four.  The MNL4+ is the first event of the regatta.  WMRC will have to edge out just one crew from their semifinal at 1:45pm in order to make finals on Saturday.  However, that task may be difficult as they are facing upstart program ERAU and regular lightweight medalists in Delaware and Georgia Tech.  The MN4+ will race at 2:48PM against Temple. NSU (LA), Wash U and Tennessee.  There are no easy races and in order to be guaranteed to advance to semifinals, the men will have to finish in the top 3 of their heat.  Failing to do that, the men would be racing the clock as the next 3 fastest times overall from the field advance.

Varsity Women
After the Occoquan sprints, the varsity women sat down to discuss the rest of the season. After some heated seat races in March, some of the rowers were eager to fight for another chance at earning a different seat. However after our talk, they decided as a squad that it would be best to run the rest of the season in the same line ups as Occoquan Sprints.

So this week leading into SIRA, we were met with some odd weather. Tuesday started by showing clouds and small bits of rain. Determined to get a bit of rowing on the water though before the big race, we decided to launch knowing we were going to get soaked. What we did not expect were the 20-30 mph gusts that hit us 30 min. into practice. I am pleased to say that everyone present worked impressively well together to ensure both the equipment and teammates made it back to the boathouse safely. By the end, pictures were being taking, and laughs were shared before racing back to campus to warm up.

On Wednesday morning, the plan was to go on a short row, then load the trailer for the trip to Oak Ridge. Unfortunately though, wind and cold temperatures kept the women from rowing. This meant trailer loading finished earlier than expected, so taking advantage of the extra time, all the varsity women went to Duck Donuts to share a bite to eat. The thought was that it would be a great opportunity to thank the Varsity Women for all their hard work this season, and for being such a wonderful group of athletes to coach and get to know. Before they left a challenge was put to head coach Graham, from one of the rowers. Mairin, challenged the coach to a race to see who could eat a donut faster. The stipulations were that you had to eat the donut in one bite, then swallow faster than the other person. The race was close, but Coach Graham ended up getting the delicious, warm, chocolate covered sprinkled donut down first.

The team has worked really well together this last week, ensuring everyone has a good chance to prepare for the races ahead. They are looking forward to this weekend!

Both lineups have remained the same since Occoquan Sprints on April 6th. In order to maximize the quick turn around from regatta to regatta, the Varsity Mens squad had to work their schedule a little differently to allow as much practice time in their lineups as possible. The varsity men have put in some great work on the water these past 2 weeks, refining parts of the stroke to allow them to get every inch out of each stroke.

This past week was a little different than normal with Coach Jason Mitchell sidedlined due to surgery on April 9th. Luckily WMRC has Assistant Coach Kevin Moran, who was able to conduct practices for both boats and keep a close eye on the improving skill of the varsity mens squad. Kevin has been able to provide that little something extra that will hopefully be seen during racing this weekend.
The men will enter a Varsity 4+ and a Lightweight 4+. The MV4+ will race at 5:30pm on Friday and face Texas, Texas A&M, Temple, and Murray St with the top 3 advancing to semifinals. Temple is a powerhouse program from Philadelphia and perennial medal contender. The ML4+ will race against ERAU, VCU, Clemson, Purdue, Liberty, and Florida on Saturday at 11:47AM. Due to limited entries this will be a final. The men have already faced VCU and Liberty at the Occoquan sprints. They were 15 seconds off of VCU and 15 seconds ahead of Liberty. They will look to improve upon those margins. Purdue, the alma mater of Head Coaches Jason and Graham, is always a threat at SIRAs and should also boast a fast crew in this event.