A Campaign for the Future of
William & Mary Rowing

“Row Tribe Row!” Teammates, parents, alumni, and friends have screamed this inspiring phrase from the banks of regattas for decades. They’re powerful words of encouragement for the rowers who give their all to move shells together as friends, as teammates, and as members of the larger Tribe Rowing family.

William & Mary Rowing has reached what we believe will be a new chapter in its history. The athletes have been recruiting potential novice rowers on campus this Fall with the intention of fulfilling the program’s #1 overarching goal—to significantly increase the number of athletes rowing for William & Mary. This season’s goal—to have at least 80 athletes rowing, thriving, and competing in the spring of 2020. Next season? Closer to 100 athletes.

There’s more. In addition to recruiting more athletes, the team hopes to have athletes competing in every possible event at the major Fall and Spring regattas. That means that W&M rowers would compete in every Olympic sweep and sculling boat class, as well as in several other boat classes, such as the coxed 4, JV8, and every novice event.

Ambitious? You bet it is. Getting 80 athletes in seats this year will be a big stretch (and a balancing act). 100 athletes? The prospect makes the coaches’ heads spin!

The program’s current equipment is being stretched to its limits. And even with the addition of new shells, most of the current equipment will need to be held kept and maintained. Unfortunately, there is no room—none—for any significant equipment purchases in the team’s operating budget.

That’s where we—alumni, parents, families, and friends—enter the picture. The Friends of William & Mary Rowing hopes to encourage everyone to embrace the larger picture. A $20 donation is to the team on One Tribe One Day is important, but we believe that we can do more as the program enters its next chapter.

In order for the program to grow in numbers, it needs much more equipment—shells, oars, ergometers, electronics, coaching launches, spare parts, all of it. Our hope is that the Tribe Rowing family will come together to support 80-100 William & Mary rowers a year with the quality equipment they’ll need to train on the Chickahominy and to compete against national competition. 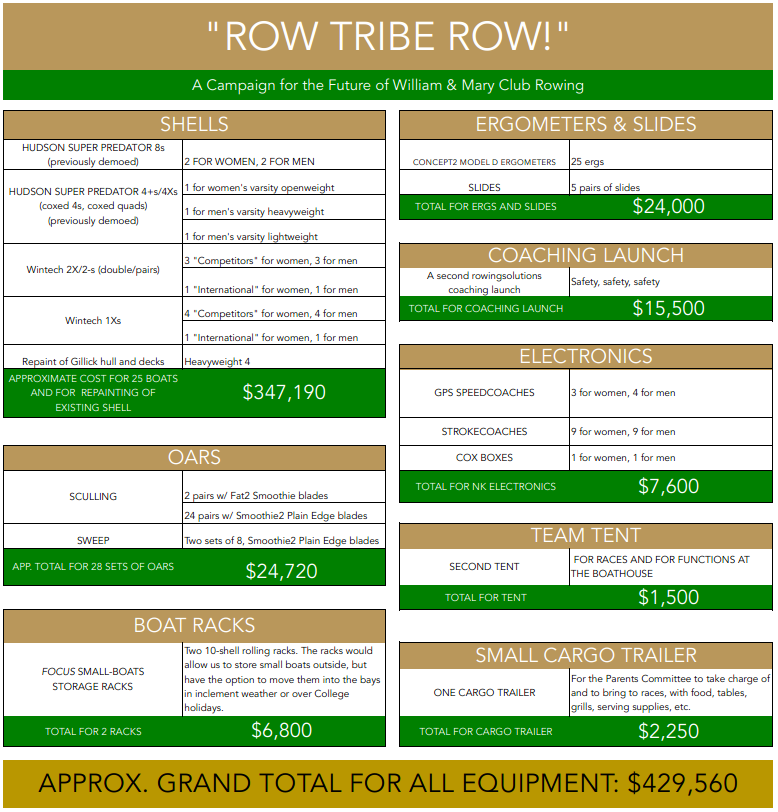 This is a big initiative. In total, we need to raise almost $430,000. It is time for us to take a bold step forward as the team embarks on this next successful journey.  Please join us in this campaign by making a donation using the link below.